William Binney—with whom we shall spend some time along the way—said in a public speech „I left the NSA because the systems that I built were turned against you. We had a legitimate charter in foreign intelligence gathering, but then they went and turned those systems against you—I didn’t mean it, but they did it.“

People began to understand within the system that it was being sustained against democratic order, not with it. Because they knew that what had come unmoored had come unmoored in the dark, and was sailing without a flag. They were good people, and they began to break. And when they broke, the system broke them back. In the end, at least so far, until tomorrow, there was Mr. Snowden, who saw everything that happened and watched what happened to the others.

He understood, as Chelsea Manning also always understood, that when you wear the uniform you consent to the power. He knew his business very well. Young as was, as he said in Hong Kong, „I’ve been a spy all my life,“ and I believe him. And so he did what you have to have great courage to do, wherever you are, in the presence of what you believe to be radical injustice. He wasn’t first, he won’t be last, but he sacrificed his life to tell us things we needed to know.

Edward Snowden committed espionage on behalf of the human race. Knowing the price, knowing the reason, knowing that it wouldn’t be up to him whether sacrificing his life was worth it.

I need not explain to you that it is possible to consider a man a terrorist who tried to do too soon what we took four years and 750,000 lives in order to achieve, namely to free the slaves.

We must ask what it means—both in the private and in the public world of listening and spying and analyzing and concluding—this thing that we’re now calling „privacy,“ in relation to the thing that we used to call freedom.

But of course, in the end, all of this would not be worth talking about here, much less your coming to listen to me talk here, unless we were going to talk about what we are actually going to do. If the problem is that we slept too long, then plainly Mr. Snowden did not come but to wake us up.

And if we have a responsibility at all, then part of our responsibility is to learn, now, before somebody concludes that learning should be prohibited.

Which never happens in a free society.

The procedures—mind you only the procedures—of totalitarianism are a leading American export these days. I wish we weren’t here. I wish that everything we thought we did in the twentieth century we had accomplished. I wish we had defeated totalitarianism. I wish we had eliminated smallpox. I wish that we were growing the Net that we deserve to have, in which every human brain could learn and every human being could grow, nourished by the knowledge and the support of all the others. 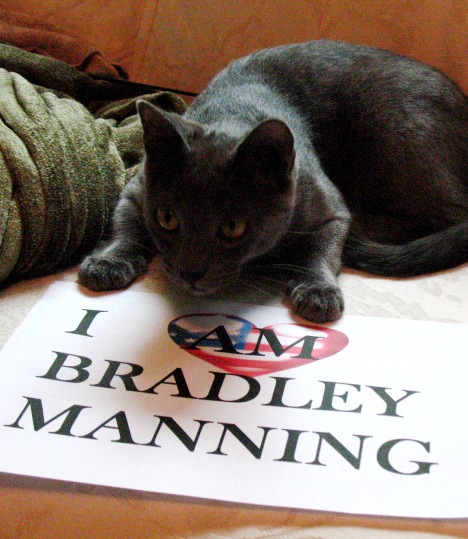 I am an Abyssinian hunting mice and mailmen in Charlottesville, VA.  I support Bradley Manning and open government, because if I can’t see the birds, I can’t catch them. Ambassador Meera Shankar of the Republic of India presents credentials to US President Barack Obama. Photo by Lawrence Jackson, courtesy of US Department Of State. From Public Domain.