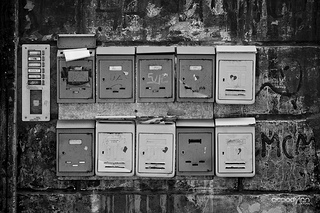 I have been forced to make a difficult decision: to become complicit in crimes against the American people or walk away from nearly ten years of hard work by shutting down Lavabit. After significant soul searching, I have decided to suspend operations. …  (Ladar Levison, Lavabit)

We see the writing the wall, and we have decided that it is best for us to shut down Silent Mail now. We have not received subpoenas, warrants, security letters, or anything else by any government, and this is why we are acting now. (Silent Circle)

I wrote about these things over twenty years ago and when I first wrote PGP and technology extrapolations leading us to a future where the governments can listen to all our communications, can search through all our communications and do pattern recognition and study our traffic patterns. But I didn’t think it would get this bad.

Q: Is Riseup working with the NSA?

A: We would rather stop being Riseup before we did that. We are not working with any government agency. We have never simply handed over information when requested, and for years have had a no logging policy. We have fought and won every time anyone has tried to get us to give up information. We have never turned over any user data to any third party, fourth party, fifth party or any party.

Q: But your servers are located in the U.S., doesn’t that mean you have to install backdoors/monitoring/etc?

A: We have no control over our network providers, but we have physical control of our servers, they are not hosted “in the cloud.” This gives us much more physical assurance of the security of our machines.  (…) Also, the US still has better laws for internet providers than in many other countries, including many places in Europe, where there are data retention laws requiring providers to keep logs. The US has no such requirement and it has been our policy for years to not keep any logs.

…since Italy is a loyal subject of the American empire, we are pretty sure that if the U.S. authorities want to intrude into your privacy, the Italian allies will be absolutely ready to give them a hand. So please don’t simply assume that since our servers are not based in the U.S.A. we can protect you from the NSA more than an American provider. This is not true at all!

Yes, we can face defeats, but it really demoralizing to see 30 police officers breaking your home and exposing all your life just because your political and life position … all broadcasted by television. None of them was related to the bombs, none of us is related to the bombs, that’s just an excuse to fuck our lives. We need you to keep working on this, and educate people everywhere. Our dictatorship ended in 1990, but before that the only way to survive as resistence was to share knowledge and practices, we need to keep that today.

FBI seizes server providing anonymous remailer and many other services from colocation facility.

On Wednesday, April 18, at approximately 16:00 Eastern Time, U.S. Federal authorities removed a server from a colocation facility shared by Riseup Networks and May First/People Link in New York City. The seized server was operated by the European Counter Network (“ECN”), the oldest independent internet service provider in Europe, who, among many other things, provided an anonymous remailer service, Mixmaster, that was the target of an FBI investigation into the bomb threats against the University of Pittsburgh.

“The company running the facility has confirmed that the server was removed in conjunction with a search warrant issued by the FBI,” said May First/People Link director Jamie McClelland. “The server seizure is not only an attack against us, but an attack against all users of the Internet who depend on anonymous communication.”

Disrupted in this seizure were academics, artists, historians, feminist groups, gay rights groups, community centers, documentation and software archives and free speech groups. The server included the mailing list “cyber rights” (the oldest discussion list in Italy to discuss this topic), a Mexican migrant solidarity group, and other groups working to support indigenous groups and workers in Latin America, the Caribbean and Africa. In total, over 300 email accounts, between 50-80 email lists, and several other websites have been taken off the Internet by this action. None are alleged to be involved in the anonymous bomb threats.

“The FBI is using a sledgehammer approach, shutting down service to hundreds of users due to the actions of one anonymous person,” said Devin Theriot-Orr, a spokesperson for Riseup. “This is particularly misguided because there is unlikely to be any information on the server regarding the source of the threatening emails.”

“We sympathize with the University of Pittsburgh community who have had to deal with this frightening disruption for weeks. We oppose such threatening actions. However, taking this server won’t stop these bomb threats. The only effect it has is to also disrupt e-mail and websites for thousands of unrelated people,” continues Mr. Theriot-Orr. “Furthermore, the network of anonymous remailers that exists is not harmed by taking this machine. So we cannot help but wonder why such drastic action was taken when authorities knew that the server contained no useful information that would help in their investigation.”

The FBI purportedly seized the server because it was hosting an anonymous remailer called Mixmaster. Anonymous remailers are used to send email anonymously, or pseudonymously. Like other anonymizing services such as the Tor network, these remailers are widely used to protect the identity of human rights activists who place themselves and their families in grave danger by reporting information about abuses. Remailers are also important for corporate whistle blowers, democracy activists working under repressive regimes, and others to communicate vital information that would otherwise go un-reported.

The Mixmaster software is specifically designed to make it impossible for anyone to trace the emails. The system does not record logs of connections, details of who sent messages, or how they were routed. This is because the Mixmaster network is specifically designed to resist censorship, and support privacy and anonymity. Unfortunately, some people misuse the network. However, compared to the rate of legitimate use, the abuse rate is very low. There is therefore no legitimate purpose for the FBI to seize this server because they will not be able to obtain any information about the sender. This is plainly extra-judicial punishment and an attack on free speech and anonymity on the internet and serves as a chilling effect on others providers of anonymous remailers or other anonymous services.

In absence of any other leads, the FBI needs to show that they are making progress in this case, and this has meant seizing a server so they can proudly demonstrate they are taking some action. But what this incident shows is they are grasping at straws and are willing to destroy innocent bystanders for the sake of protecting their careers.

About the organizations involved

MayFirst/People Link (mayfirst.org) is a politically-progressive member-run and controlled organization that redefines the concept of “Internet Service Provider” in a collective and collaborative way. May First/People Link’s members are organizers and activists who elect a Leadership Committee to direct the organization. Like a coop, members pay dues, buy equipment and then share that equipment for websites, email, email lists, and other Internet purposes.

ECN (European Counter Network – ecn.org) is the oldest independent service provider in Europe providing free email accounts, mailing lists, and websites to organizations, activists, and movements that are involved in human rights, freedom of speech and information in Italy and Europe. ECN is anti-fascist and works towards a just and equal society. Years ago, before sites like Youtube and Vimeo existed, ECN created a platform called NGV where people could upload and share independent video of human rights violations. Nowadays ECN works primarily with anti-fascist and anti-Nazi movements in all of Europe, providing space and resources to political and social centers.

A: Criminals can already do bad things. Since they’re willing to break laws, they already have lots of options available that provide better privacy than mixmaster provides. They can steal cell phones, use them, and throw them in a ditch; they can crack into computers in Korea or Brazil and use them to launch abusive activities; they can use spyware, viruses, and other techniques to take control of literally millions of Windows machines around the world.

Mixmaster aims to provide protection for ordinary people who want to follow the law. Only criminals have privacy right now, and we need to fix that.

Some advocates of anonymity explain that it’s just a tradeoff — accepting the bad uses for the good ones — but there’s more to it than that. Criminals and other bad people have the motivation to learn how to get good anonymity, and many have the motivation to pay well to achieve it. Being able to steal and reuse the identities of innocent victims (identify theft) makes it even easier. Normal people, on the other hand, don’t have the time or money to spend figuring out how to get privacy online. This is the worst of all possible worlds.

So yes, criminals could in theory use mixmaster, but they already have better options, and it seems unlikely that taking mixmaster away from the world will stop them from doing bad things. At the same time, mixmaster and other privacy measures can fight identity theft, physical crimes like stalking, and so on. (www.torproject.org/docs/faq-abuse.html)

A: Anonymous remailers work by connecting to other anonymous remailers in a chain, and every one in that chain removes the mail header information making it impossible to find the real sender. The Tor project maintains a list of typical users of this and other anonymity systems, and the Mixmaster home page